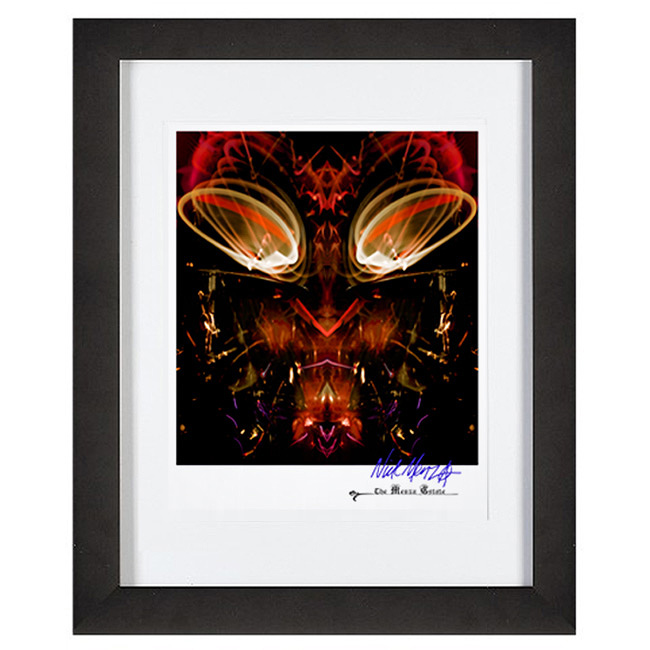 Dragon is a prime example of the new dimension that reveals itself when rhythm is captured. To build the work, Menza utilized red and orange LED-triggered drumsticks, along with Mylar-covered drumheads handmade by the artist. Upon close inspection and study of the work, many viewers will see what appears to be a figure that is remeniscent of a Dragon.


Like the music he brought to the world, Nick Menza's life was powerful, inspiring, and unforgettable. As musician, he is best known for his extraordinary work with Megadeth during the band's most acclaimed and popular era. He was also a highly devoted artist that crafted work with wood, iron, canvas and now...rhythm.

Menza's contribution to metal can not be understated. His extraordinary talents are heard on some of the most touted albums within the genre like Rust In Piece, Countdown to Extinction, Youthanasia, and Cryptic Writings. His rhythm on tracks like "Holy Wars" and "Hangar 18" stand as some of the most exceptional drumming in metal history. He was also a faithful member of fusion supergroup OHM, who Nick was playing with at the time of his passing.

Aside from his musical career, Nick was an extraordinary artist that was continually exploring different mediums to express himself. With INFLUX, Menza embarked on the path of bringing sound to sight. Each of the 3 pieces in the INFLUX collection are built by Menza's drumming, as he used drumsticks to capture rhythms that would translate to fine art.


Nick Menza began working on INFLUX in mid 2015. Working with art team/publisher SceneFour, the work featured in the collection is crafted from rhythm. Like a painter using brushes with oils of different colors, Menza utilized drumsticks that light in a variety of ways to craft rhythms that would translate into visual art. The process is an extensive one, but begins with open shutter photography to isolate Menza's rhythms into one frame. These isolated rhythms were then brought into the Los Angeles studio of SceneFour to bring out the abstract nature inherent within the captured movement.

In total, there are 3 different works within the INFLUX collection. Each available in editions of 100.

For Pricing and Availability, please complete the form below.